At first the Ginger Flic comedy crime stories, detailing the adventures of a tricolour calico detective cat in Whitstable, were a distraction. From the misery of the pandemic certainly, and also from dealing with my mother’s rapid physical and mental decline in her final year. And absolutely from the hard graft of working on my ‘serious’ novel ‘Palisade’ set in 17th century Jamestown. Unfortunately, in that time and place, nearly everyone dies, usually horribly, so it was the wrong project at the wrong time. 50,000 words in, the over-researched grim tale still refused to take off. The WoW novel group were very kind but also very honest in their comments.

By contrast, the Flic stories had got a laugh from the WoW short story group. Some people even seemed to love them. Gradually, the realisation dawned I had something here and I could link up the stories into a narrative arc. I also realised that by setting it in a fictitious present day Whitstable, I could also write what I knew. A tennis murder is easier to write if you’re a member of the local club. A relentless failure to grow edible vegetables in my allotment provided the spark and locale for another murder plot, pun intended. Being the local neighbourhood watch co-ordinator in my area provided more material for another crazy tale of criminal excess. I sucked my teeth when I wrote the story of a deeply unpleasant local writers’ group, but it seemed to draft itself, your Honour. But no local writers have been hurt in the writing of this novel, I assure you.

I had to take time out from WoW in my mother’s final months and editing the novel was one of the best ways I found to cope. That certainly drove home the adage that writing is re-writing. I thought I had a relatively clean product when I delivered it to Lin (who as well as being a WoW member runs Coinlea Word Services) to copy-edit, but she easily found over 1000 further edits to make. I can’t thank her enough for her thoroughness and helpful advice over and above the call of duty. A friend of my daughter’s who is a designer, Jo Faulkner, offered to do my cover. Magic.

Finally, a few weeks after my mother’s cremation, a change of duties from power of attorney to executor and many more rounds of editing, I thought I was happy with the text. Then the physical proof copy arrived from Amazon, but by then I’d read it so many times I wasn’t seeing the errors any more. Luckily my wife and best reader Denise found yet another load of mistakes in the text. Lin was professionalism personified in that period as she made repeated changes to the paperback PDF and the ebook EPUB files while retaining the formatting. I just apologised a lot for messing her around.

Finally, two months after my mother’s death, I got the novel across the line and online. I’ve wondered if my determination to write something that makes murder comical was a way of dealing with her mortality. I know that coming up with ridiculous plot twists, bad puns and totally improbable cat dialogue made me chuckle a lot in a period with few laughs.

I have very limited expectations of the final product. The average self-published novel sells around 150 copies, so for me it was all about enjoying the writing and getting the novel done. I’ve pledged half the ebook revenues, up to the first 500 copies sold, to AgeUK, who were very helpful in supporting my mother in her final years, and to RSPCA, where Ross, Flic’s side-kick, came from. Flic herself is also a rescue cat, but she arrived as a kitten from the vet, having been found abandoned in a cardboard box under a parked car. She was always going to be proper fictional hero material.

Our new book is now available 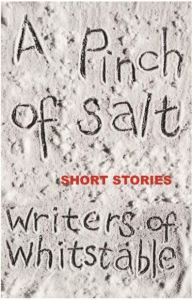 There are three meetings of Writers Of Whitstable each month, two workshop groups for novels and one for short stories and other work. Please email for details if you’d like to come along. We’re meeting using Zoom during the Covid-19 pandemic.